Frequent readers here will know that I often start these correspondences with something like, ‘its been a crazy week’ or ‘much ado since we last gathered here’ or whatever. For this installment, I have to tell you these statements will most likely not suffice at all. So much has happened since the last post here that I cannot really write about it all as it would be too long and difficult to describe in deatail. I wonder if point form is the best way to go in this instance?

Forgive the name dropping. I guess you’ll just have to trust me that I am not trying to gain your favour by mentioning famous people. Or am I? 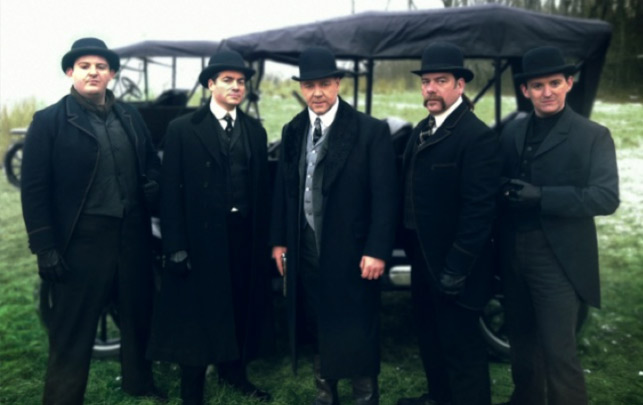 -Kevin Corrigan is an a brilliant actor and knows more about music than most musicians.
-Thankgiving Weekend in NYC is a big deal, and 6 year old boys really like big inflatable things.
-driving a Model T Ford in 1918 was a really difficult thing to do
-The Smilingland Gig in Toronto was once again an awesome time for a great cause
-flying in a chopper over the rivers that surround Manhattan is an amazing experience.
-attending Les Mis Premier in London was an amazing experience, though sitting directly between Jean Valjean and Inspector Javert while watching the film was kind of nerve-wracking.
-Les Mis is the best Movie-Musical I’ve ever seen, and one of the best films I’ve ever seen.
-Russell’s Javert is a triumph and he has never sung better. Many people will truly understand the Inspector for the first time I think.
-Hugh Jackman’s 24601 could very well win him an Oscar.
-I’m not sure how anyone is ever going to sing ‘I Dreamed a Dream’ again after Anne Hathaway’s version goes public. One of the most beautiful and tragic performances I’ve ever witnessed.
-Samantha Barks is a world star in waiting. What a thrill to have sung with her a few times myself.
-there is not a single bad performance in the rest of the cast of Les Mis, and yet it looks so beautiful, I could watch it with the sound turned off.
-Joes Pub is an excellent place for an Indoor Garden Party with the gang. RC and Hugh’s Confrontation was the highlight.
-Scott Grimes and Bob Guiney have a great act you should check out. Bob is charming and very talented. Scott is the greatest singer on earth.
-Richard Marx has long been a guilty pleasure of mine and I got to see him play solo at the City Winery, the same gig I played a few months back.
-Colin Farrell is a great fella, an amazing horseman, and brilliant actor.
-attending Les Mis Premier in New York was an amazing experience…again forgive the name dropping, but in the spirit of giving, here’s a few celeb sightings and comments…

…perhaps I’ll stop there. Moving on.

-a sad and most unsuspected call came to the set late last Wednesday, having me bolt for the airport to head NorthEast in a hurry.
-RIP Don Pardy, my Father in Law. A wonderful, selfless Dad who loved his family and friends. I will miss you.
-holding the hand of someone you love while they take their last breath is an amazing experience. Truly an honour.
-walking the people you love through the hardest hours of their lives is an amazing experience. Truly an honour.

I’m sitting in my trailer awaiting my friends Perry Chafe and Allan Hawco to join me. The Republic of Doyle gents are in town for a couple of nights and I’m eager to tip a jar with them.

A couple more beats for Dingy Worthington this week, then home for the Holidays. I’m really looking forward to a few weeks home and quiet. I’ll be ready to ring in the New Year after that. The Year of GBS and a celebration 20 years in the making.