Currently awaiting the delayed arrival of an aircraft that should quickly turn around and get me to Halifax. From there I am to be whisked in very Rock and Roll fashion down the shore to Lunenburg, Nova Scotia, where I am to help celebrate the re-launching of the famed schooner, Bluenose. (actually the Bluenose 2 for the stickly out there).

Pretty sure most Canadian and maybe even North Easter North Americans know about The Bluenose. Wikipedia says,

Bluenose was a Canadian fishing and racing schooner from Nova Scotia built in 1921. She was later commemorated by a replica Bluenose II built in 1963. A celebrated racing ship and hard-working fishing vessel, Bluenose became a provincial icon for Nova Scotia and an important Canadian symbol in the 1930s. The name “bluenose” originated as a nickname for Nova Scotians from as early as the late 18th century.

I remember asking my Father about the Bluenose when I was a wee fella. I knew about it because it was, and still is, the big ship that fills up one side of a Canadian 10 cent coin. 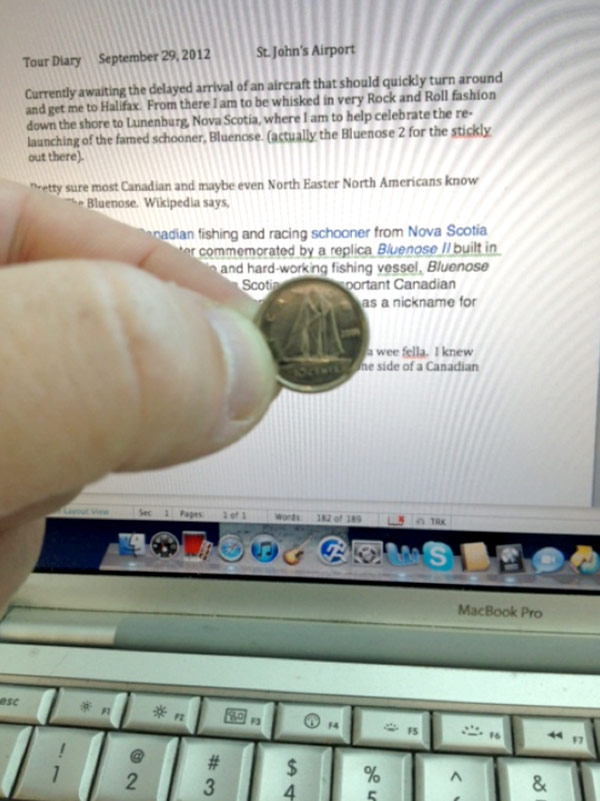 I think Dad told me it was a famous fishing boat from the Mainland, which for the uninitiated meant anywhere in North America other than Newfoundland; and also meant it was most likely no where near as good as any boat built on The Rock. For this reason I spent a big part of my youth a bit jealous that Nova Scotia got one of their boats on a coin and Newfoundland, to knowledge at the time, had not. I have long since gotten over this. Don’t worry.

I would learn later that the Bluenose was a big deal in the schooner world and a bigger deal in Nova Scotia. It has become an icon of Nova Scotian history and pride in a million lifetimes built on the sea.

It will come as no surprise to frequent readers here that I love Nova Scotia. From the first GBS gigs at the Lower Deck, I have felt amongst friends and family there. So I am delighted to get a chance to join in the celebration on one of the Provinces most special days. I am grateful to the owners for asking a Non Bluenoser to sing along, and I might keep the story of my silly youthful resentment to myself till tomorrow as a sign of my respect and appreciation.

Much ado in the near and distant future. A quick turn around tomorrow morning should se me back home tomorrow to sing in the Night of a Thousand Songs; a benefit for the God of Newfoundland Song, Ron Hynes. Ron is my favorite songwriter. Ever. He was one of the founding members of the Wonderful Grand Band, a musical/comedy act in the 70’s that owned the Radio and TV airwaves in Newfoundland. I’ve written about them many times here I’m sure. They sang songs, not from New York or La or London, but from home. We all grew up completely confident that the coolest stories we could tell were our own. The best place to look for songs was your own back yard. At the heart of that band and many solo CD’s since was Ron’s songwriting. A poet from just up the shore who got a whole generation of young Newfoundland would-be musicians and artists to look in before looking out.

Ron is battling Cancer and may be off the stage for an extended period. He needs a little help to get him through and me and every other musician I know from Newfoundland, are jumping to help. Night of a Thousand Songs Sold Out in about a millisecond as scores of music fans want to lend a hand for a Hero. I’m thrilled to hear of similar support in Halifax and Toronto and even Nashville. Thanks everybody.

Next week I blast back to the Maritimes. I play at the Trailside Café on Prince Edward Island on Wednesday and Thursday. These days I’ll be accompanied by Cory Tetford on guitar and stuff, and Lisa MacIsaac on fiddle and stuff. Then we three roll to Halifax for a celebration of Alexander Keith’s Birthday and we’ll be joind by the other AD Band folks, Kris on drums, Sheab on bass, and Todd on piano and stuff. Really looking forward to the whole weekend. Andrew James Obien joins us in PEI. He’s all kinds of awesome.

Out through the AC Lounge window, I see that the tardy plane is sliding into the gate. Looks like the bag guys are rushing stuff of their which most likely means they want to turn this sucker around in a hurry. Best suspend this chat here. Don’t want to risk missing the plane and have Bluenose waiting on me.