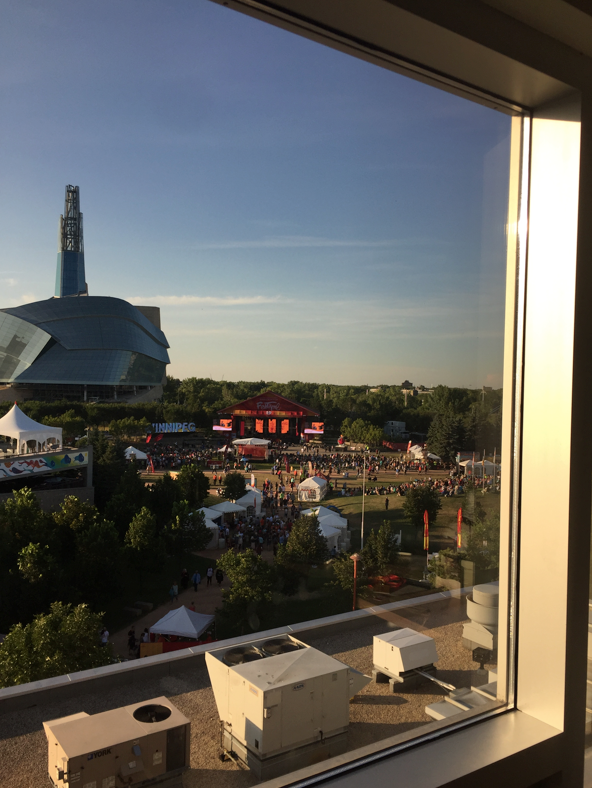 I feel like I’ve had a private box to some great entertainment all day. I watched Cory Tetford light the place up with his amazing voice. I was as charmed as ever by The Fortunate Ones and their harmonies. I’m about to watch Meg Warren and Repartee heat the place even further with their pop wickedness. Feeling pretty lucky to have such a luxury to watch the gig before I walk over and play it myself.

But here’s a secret.

I don’t often spend this much time watching the gig and the concert grounds before I play my set. I do like to check out a few tunes if we have a new opening act or to wander the festival grounds to other stages, but sitting here all day watching the full sets of the other bands while the crowd slowly but surely grows, is not a thing I often do. Truth is, I find it kind of nerve wracking. I worry that the crowd is not growing quick enough and maybe there won’t be the audience we’d hoped for. I watch every cloud as it passes over the stage area and wonder if it will rain on the parade we’d been planning for months. I worry that the opening bands won’t be great and send casual wanderers away, or more likely today, that the opening acts will be so good that I won’t be able to live up to the build up of it all. That, I’ll be a let down after so much great stuff. I worry that I can’t sing as high as one fella, or play guitar as fast as another. And I worry that in a situation like this, on this beautiful day on a perfect stage with amazing sound and lights, in a perfect park where the audience gets in for free, that the one weak link will be me. And if it goes poorly, I won’t have a single thing to blame it on but me.

But somewhere, deep down, I know that these are just nerves. Butterflies that I should be able to turn into energy if I banish them to the right place. I remind myself that admitting it could go poorly is often the biggest reason it does not. In somewhat joking ramp up pre gig speeches to the band, I often say, “It will only be good if we make it good. It won’t be good because we are often good or because we were good last night or might be tomorrow night. It won’t be good if we expect it to get good by itself. It will only be good if we make it good. So let’s go make it good. For us and especially for everyone out there who gave us their night and trusted us to give a good one back to them.’

The crowd is growing beyond thousands now and Repartee are about to hit it hard, as they should. I’m gonna put on my boots and walk to the back stage area and enjoy their tunes as I try to turn these butterflies into something useful.

They say over 10,000 people will give us their night tonight. I say lets give them 10,000 great nights right back to them. And thank them for letting us do so.

It’s the magic hour in the middle of the park. When it’s not quite daylight and not quite dark.