A Week at The Warehouse, Available Today!

Well, today is the day. Recorded in January, the new album, A Week at The Warehouse drops worldwide today. Thank you so much to those of you who have pre-ordered. For everyone else, you should be able to find the new album anywhere you buy or stream music. 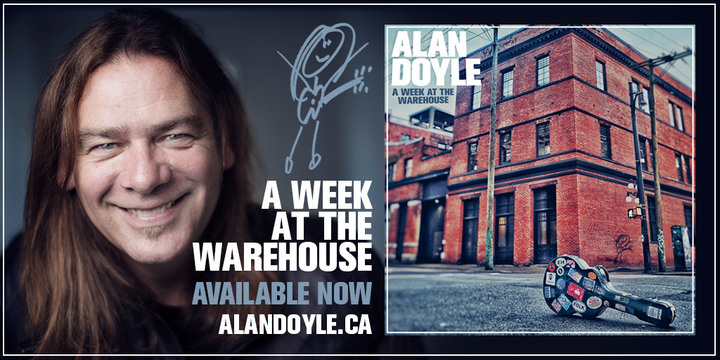 As usual, this album is a collection of my many varied influences. You’ll hear some Traditional Celtic, Newfoundland-sounding songs like Come Out With Me and Bully Boys. You’ll also hear some songs that are quite rock ‘n’ roll like Ready to Go. Many people have already heard and applauded Summer Summer Night, the most country influenced tune on the record, and I’m grateful to Country Radio and video stations for playing the single.

There are a couple of deeply personal and special songs on the album. Somewhere in a Song is really a tip of the hat to my Mom and Dad and how they managed to raise us in a house that in retrospect had very little modern finery but had, in abundance, so much more of life’s most important things. Beautiful to Me is my announcement to the world that my concerts are an open door for anybody of any shape or size or colour or race or creed or gender identity or sexual preference. All you need is Love in your heart and my place is yours.

I got to work with two of the biggest heroes of my musical life thanks to this album. Bob Rock produced a significant portion of the soundtrack to my youth. I literally still can’t believe I got to stand next to him day after day in a recording studio. His former Payolas bandmate Paul Hyde makes a very special guest appearance on the album as well. I couldn’t be more chuffed about it all.

But the real stars of this record are Kendel Carson, Cory Tetford, Todd Lumley, Shehab Illyas, and Kris MacFarlane. Beautiful is probably not a big enough word to describe this Band. What an incredible privilege it is to stand in the middle of them and sing a song. I am delighted to tell you they’ll all be aboard for the Come Out With Me Tour in 2018!

It is always an odd combination of nervousness and excitement when a new project finally leaves your hands and goes out into the world. So, I really hope you like the tunes and they find a place in your day-to-day listening. Even better, I hope you think the songs would make for a great night out and you come to see one of the shows on the tour starting early in the New Year.

Thanks so much for everything.