Well its been a pretty quiet couple of weeks. Not much to report.

Just kidding of course. Where to begin?

Weekend before last, the third incarnation of the Crowe/Doyle Indoor Garden hit the stage in New York City. I would be tough to call it anything other than an amazing night for all concerned. I got to NY a few days prior and met up with RC, Scotty, and the Size 2 Shoes Gents and a few other regular members of the gang. Was delighted over the next few days to work with Roberta Duchak, a lovely lady who has a storied pedigree in Musical Theatre and has become one of the most sought after vocal coaches in North America. Likewise, I was charmed to meet Samantha Barks who is to star in Les Mis with RC and could be one of the loveliest singers I’ve ever shared the stage with. Over emails and phone calls, I had worked with Carl Falk before, as he did all the additional music on the Crowe/Doyle Song Book Vol. 3, but I have never had the pleasure to meet him in person till the day of the show. That same day big Kev dashed in and rounded out the Merry Men. We all gathered and made for a great night on stage and in the audience too, I think.

Have I forgotten anyone? Oh yeah, Sting played too.

The day of the gig RC, whispers to me, ‘Looks like Sting might make it towards the end. He wants to sing ‘Every Breath You Take’ in the key of A major. Can you play it?’ I coolly looked right at him tried not act anywhere near as excited as I was, took a deep breath, and lied right to his face saying, ‘Yeah of course no sweat.’ Next possible moment I was surfing the net for chord charts and Youtube performances to get the changes right and scribbling cheat notes.

It’s a funny thing when opportunities like this arise. Often, and lucky for me, I am asked to do things I have no history or experience doing. You may wonder if I got nervous or anxious when I first acted with Oscar winners, or while meeting Royalty, or almost filled in at the last second for Blue Rodeo’s Bass Player live on National TV at the Half Time show of the Grey Cup. And I certainly did, but I was buoyed by the fact that I honestly am not supposed to know how to do those things. I really don’t want to shag these things up, but I don’t feel the same pressure I feel when some one asks me to play guitar or sing for them.

You see, I AM supposed to know how to do those things. I have been playing guitar and singing professionally for pretty close to thirty years. I should be way better at both of those things. And I am not being falsely modest here. I can sing in tune in my own way, and I can play rhythm guitar modestly well, but I am not a hired gun axeman or vocalist by any stretch. And most times that suits me just fine, as it is my own thing and thankfully some folks enjoy it. But when you are about to play ‘Every Breath you Take’ for Sting, a fella like me can’t help but think, ‘Frig, I wish I was a better guitar player.’

So I went and got Scotty and between him and me we agreed on what we thought the most commonly used chords and changes were between the many Sting and Police versions of this tune and we had something ready, in case one of the most famous people in Music History really showed up and asked us to play for him.

As many of you know, show up he did, and me and Scotty brazenly launched into it, again, trying to look muso cool, like this was no big deal. Pretty sure I can speak for Scotty when I say I can remember no time on stage when I wanted to play some thing right. I confess that normally occupies little of my attention.(I hope that’s not being too honest) Most times I am living in the moment of the songs and performance, and the nuts and bolts of the chords, rhythm and melody, have been ingrained over dozens or hundreds or thousands of plays, and they come out correctly on their own. But during the Sting song, behind my ‘yeah cool song man’ kind of smirk, I was counting bars and mentally forecasting the changes and sections to come.

I think it went well. The crowd loved it and Sting seemed as delighted to get to play with new people as we were to accompany him. There was one point though where Sting looked at me across the stage and uttered one word…’bridge’. It happened really quicky, and all that I am about to describe happen in a sec or two.

I looked back at him and thought to my self, “did he say ‘bridge’ or did he ask ‘bridge?’” And I was blown back to one of the hockey dances in the basement of the church in Petty Harbour in the mid 80’s where all the fellas would strategically try to get a gal lined up to dance for the slow dances. I recall getting a pretty girl who shall remain nameless, to agree to dance with me to this song. It was one of those dances where your head is past hers and slowly you both move your head back and you feel your ear next to hers, next thing you know, your cheeks are brushing, and in any second lips will be touching and you’ll be getting a kiss at the hockey dance. The song ended before I managed to get a smooch, but I remember it being the soundtrack to a lesson in courtship and a beautiful memory of my young life in my little fishing town with a population of 500 or so.

And now here I am in the Greatest City on Earth playing with the singer and composer of this song, and is he asking me if the bridge comes next? Jaysus.

Of course, I tried to show none of this irony and excitement to Sting or the others on stage or the audience. I just looked back at the lead singer of the Police and when he said or asked ‘bridge’, I said ‘yep.’

Then it was over and we all cheered and thanked Russell for organizing this whole deal and were celebrating an uber cool moment with Sting when I had to turn the corner to get a moment to myself and blink a few times. When I got around the corner, Scotty was already there. This is what two lucky bastards look like moments after they got to be Stings band. 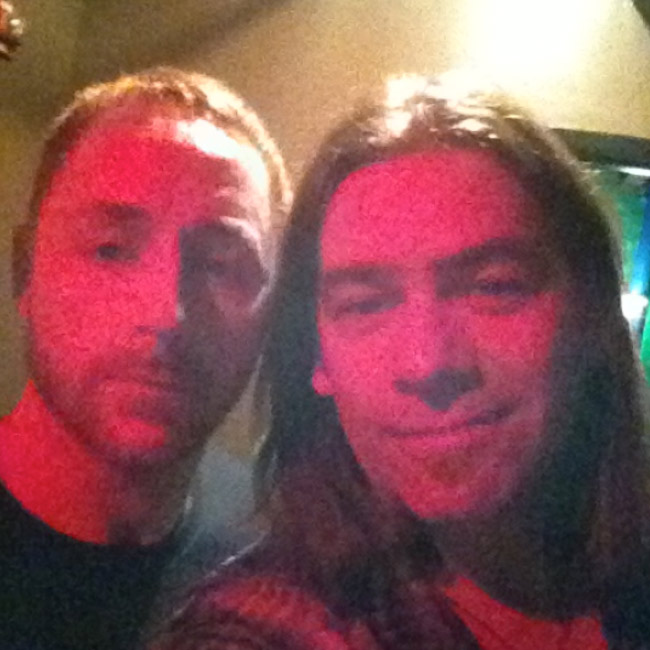 That’s probably enough for now, though I’ve got loads to tell you about. Topics include the New GBS XX Box, video, and press and tour dates. A cool CD myself and Bob and a few others are finishing for a friend who passed away far too young. Also a night with the Symphony as Cory and Kendel and I play AD tunes with the Newfoundland Symphony Orchestra tonight. And maybe even some cool news about a wee part in a big movie.

The sun is shining again. Got to go get the Prince at school. It was Pajama day today and when I dropped him off there were dozens of kids running around in PJ’s. What a laugh.

As always, many thanks for reading, tweeting, and supporting all the stuff. I am very grateful for all of it.

A Thanks to All Hands for the Shanty Love over on